As a human rights institution that advocates for cultural rights, the MossawaCenter decided to end a year of successes with a musical performance by the acclaimed musician Habib Shehadeh Hana of Al-Mashghal Arab Music and Culture Association, which is facing closure over financial difficulties.

However, the event was not simply about wrapping up the year. In front of an audience five hundred strong, the Mossawa Centerlaunched the Arab Fund for the Development of Local Social Initiatives, supported by local business men and women and matched by the European Union. Working with our partners at Al-Mashghal, Humanity Crew, Al-Tufula Center, CEGAS, and Intimaa Wa’ataa, the social fund will support initiatives by working groups and institutions toembolden community action, with a special emphasis on women and youth. The Mossawa Center prides itself as an incubator of Arab civil society, and this was the latest example of such work.

The event took place at the Krieger Center on Friday 15 November, where the guests were greeted in the foyer by a beautiful array of hand crafts made by women from our partners in Jisraz-Zarqa, alongside other stalls explaining our far-reaching activities.

The crowd were then led into the main auditorium and the evening began with an address from our director, Mr. Jafar Farah, who stressed the role of the Mossawa Center as a leading force in the fight for the attainment and expansion of Palestinian rights within Israel.

He was followed by Samar AmmouryMaroun, who thanked our funders at the European Union and Bread for the World, before outlining the purpose of the evening. Our board member,Dr. Nafe Haj Yehia, elaborated that the purpose of the social fund was “to support the projects of the Arab Palestinian civil society initiatives in Israel”. He also announced the date of our civil society conference on 13 December, where much of our annual research will be first publicised.While praising the cooperation of the Mossawa Center, he highlighted the importance of cultural space and resources in fighting against a range of issues in Palestinian society. He also addressed the Mossawa Center’s ongoing support for Al-Midan theatre through its forced closure. For Dr. Yehia, investing in culture and informal education is a sure-fire way to “close down prisons”.

He thanked the various representatives in the audience for their attendance, spanning from Golan Heights, through the neighbourhood of Halissa in Haifa and JisrAz-Zarqa, and down to the Naqab. Dr. Yehia also paid special tribute to attendees from the unrecognised Bedouin villages of Umm al-Hiran and Al-Araqeeb, which has infamously been demolished over 160 times, in the face of their ongoing hardships. He then went on to thank Mr. Shawky Fahel, the Founder and Chairman of the Canadian International Development Organization, who has come back to his homeland to support seven Palestinian scout branches. Dr. Yehia then  celebrated the foundation and development of our partner organization, Friends of Mossawa, in the USA and Canada in the past year.

The performance itself consisted of instrumental tracks and songs, all written by Habib Shahada Hana, and performed by local artists from around the world –from Palestine to France, Spain and Greece. The musical, entitled “Our Story”, engaged with Palestinian musical tradition with a modern twist.It drew on a deep well of classical music tradition in the Arab world,while ushering in new stages of experimentation.

The show included several new music pieces based on the combination of oriental and western traditions. The guest of honour, Rana Khoury, added vocals to Habib’s mesmerising oudin the finale, backed by the Al-Zanabik Choir of the Basilica of the Enunciation. 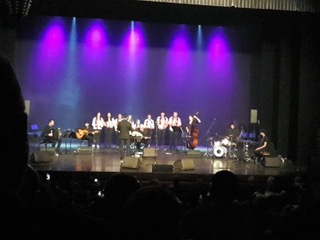