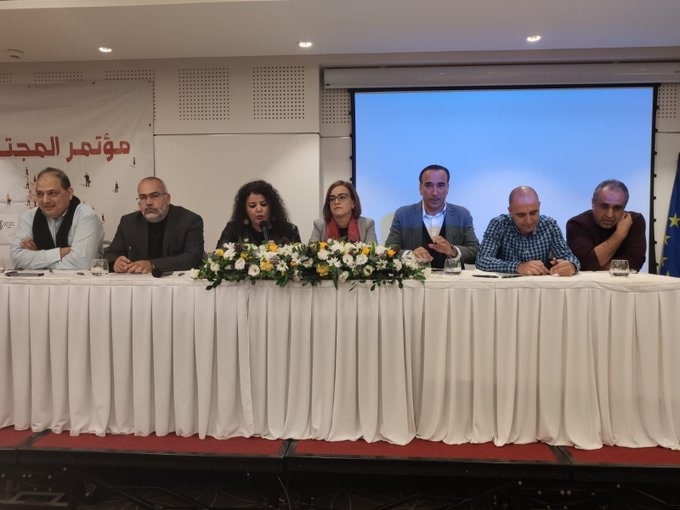 The Mossawa Center hosted its first civil society conference on Friday, 13th December at the Legacy Hotel in Nazareth, with almost 150 people in attendance, including business men and women, representatives from civil society organisations, youth groups, the Knesset, foundations, and international embassies.

This conference included several panels and the presentation of several working papers on civil society. The conference aimed to deepen cooperation between private institutions and participating organizations, including Al-Tufula Center, the Nurseries of Nazareth, Humanity Crew, CEGAS, Entimaa, and Al-Mashghal, who have been brought together on the initiative of the Mossawa Center and with support from the European Union.

The conference was supervised by the organizational advisor and director of the civil society development program at the Mossawa Center, Fathi Marshood. In his inaugural speech, he stressed that the primary aims of the conference are to increase the visibility of civil society institutions in the public sphere and to enhance the role and the impact of the work of civil society organizations. Marshood also provided ongoing support in the preparation of the working papers, which he introduced. These included papers on the reality and challenges in civil society, the experience of civil work in obtaining recognition for unrecognized villages (in cooperation with the Arab Center for Alternative Planning), the benefits of sharing resources and space between NGOs, and the strategies and mechanisms for local, parliamentary and international advocacy. A working paper was also prepared on sound management of civil society organizations and their relationship with the legal and community system.

An overarching aim of these papers is to centralise and democratise the vast but often diffuse knowledge in the civil society sector. To further tackle this problem,  the civil society program also founded a civil society website which aims to collect and publish information about Arab NGOs, entitled https://www.moassasat.org., which was launched at the conference This centralized resource will facilitate communication between NGOs and improve public awareness of civil society and its organizations. The benefits of this online initiative are manifold: it will increase the legitimacy of NGOs in the eyes of the public by increasing cooperation and transparency; it will streamline the NGOs by increasing cooperation and decreasing duplication of efforts; and, finally, it sets the stage for a more sustainable and self-sufficient CSO sector, which can draw on the extensive resources and contacts at the press of a button.

Marshood’s speech was followed by Chrystelle Lucas, Head of Operations Section at the EU Delegation, who reiterated the importance of the conference and the work of NGOs. Although there are many challenges working in this sector, she addressed the organizations directly by telling them that “all that work is very important for international organisations, who use them in international authorities”.

Throughout the conference, the history of the relationship between civil society organisations, the people they seek to represent, and political parties was celebrated. In the following speech by Mohammad Barakeh, a former Knesset member and the Chairman of the High Follow-up Committee, the history of cooperation between civil society and political parties and bodies was outlined. In 1996, the year Barakeh was elected to the Knesset, he consulted Mr. Jafar Farah, the director of the then newly-established Mossawa Center, and they agreed to establish cooperation between them. They organised a conference in the Knesset, led by the Mossawa Center, which was attended by parliamentarians from across the political divide.  Twenty-three years later, our third panel on the cooperation between civil society and political parties resoundingly reaffirmed this commitment. Samer Swaid, the Director of the Arab Center for Alternative Planning, spoke about lobbying efforts in the Knesset against the discriminatory Kaminitz Law on housing as a paragon of this relationship and what it can achieve. MK Heba Yazbak echoed this sentiment: "Our political parties have been supporting and informing socio-political awareness and identity, and CSOs are complementary to this. This is the right formula”.

The conference celebrated civil society and its accomplishments, but also addressed the most pressing issues facing the Palestinian Arab community in Israel. During the main panels, the participants debated the role of the civil society organizations vis-à-vis the state, questions of independence related to donors and political parties, and strategies on how best to tackle violence, reduce inequality, and end the occupation.

The first panel, "Strategies and Challenges of Resource Development", consisted of representation from the Taawon Welfare Association, and Al-Tufula Center, Al-Manarah – The Association for Arab Persons with Disabilities, the Friedrich Ebert Foundation, and the EU. The panel was moderated by activist and lawyer Nidal Othman, who reviewed the relationship between NGOs, the Arab private sector, and municipal, governmental and international funding institutions.

In the preliminary panel, Barakeh criticised the state for outsourcing certain functions to CSOs and private sector. He told the audience that “the state wanted to turn Arab members of Knesset into service providers since 2000, and for these parties to be held accountable for discrimination and racism".  Mr. Abbas Abbas, the Director of Al-Manarah – the Association for Arab Persons with Disabilities, however, turned this proposition on its head: the amorphous boundaries between these sectors also presents an opportunity. While the provision of services is broadly divided into three sectors — state, private, and CSOs — Mr. Abbas raised the case of his organization’s library for disabled people. The project is not only succeeding in improving access to learning for people with disabilities, but the service is generating income, reconceptualising the boundaries between civil society work and the private sector. Another perspective was offered by Judith Stelmach of Friedrich Ebert Foundation. She explained the foundation’s shift from bilateral work with individual CSOs to cooperation and coalition-building across civil society. Although there can be competition and different agendas between CSOs, this strategy is the best way to develop civil society as a whole. For Dr. Tafida Jarbawi, the Director General of Taawon, it is necessary to overcome competition between CSOs, but it is more important for funding to be geared towards capacity-building. This ensures that investments are self-sustaining and prevents a culture of dependency. The Head of the EU’s Operations Section Chrystelle Lucas also picked up on this point, explaining the benefits of their emphasis on project grants as opposed to core funding. She also outlined the EU’s upcoming call for proposals, which will focus on gender equality and climate change.

The second panel discussed civil society’s relationship with the general public, and how it can deal with the most enduring issues in Arab Palestinian society in Israel – such as human resources, violence, poverty, development, and identity. This was moderated by activist Asmahan Jabali, who outlined the barriers this community faces: they face racist laws and discriminatory budgeting, and almost half of the population live under the poverty line. In light of these challenges, the task of Palestinian Arab NGOs is enormous. The panel provided responses and insights from a variety of different localities in Israel. Dr. Rafiq al-Hajj pointed out that only 8% of CSOs in Israel are Arab, even though they make up one-fifth of the population. They are also forced to deal with issues that should fall under the remit of the state. One way forward for Dr. al-Hajj is an increased focus on grassroots action and mobilisation. “Community work is the basis of civil society,” he told the audience. Samar Azayzeh of Nazareth spoke about the difficulties in welfare training, and how this impacts youth. The difficulties in budgeting, which tend to go to more urgent areas such as infrastructure, sharpen the imperative to give civil society “the tools to advocate for themselves”. However, there also needs to be more pressure on the state to cooperate in order to close the gap.  Abdulqader Sattal was less optimistic about the benefits of cooperation, which he described as discriminatory from its inception. Drawing on his experiences in Jaffa, he delivered a stirring speech about the situation in mixed cities and the ongoing uprooting: “When we talk about mixed cities, we are talking about the struggle for existence. These are not just mixed cities, but they are targeted ones": gentrification has reduced the space of Arabs in mixed cities, and the community needs to be vigilant for further development. Meanwhile, MK. Dr. Jaber Asakaleh called for a more democratised and independent civil society, discussing the role of donors and political parties in influencing agendas, and calling for more regular feedback from the public, and a more democratic form of management.

The third and final panel, “Civil Society: Challenges and Prospects of Cooperation and Joint Work between its institutions, among the local authorities, the leadership bodies and political parties”, moderated by journalist Nidal Rafe’a, examined the prospects for cooperation and joint action between civil institutions, local authorities and political parties. Mudar Younis, the chairman of the National Committee, argued that discriminatory budgeting has created a "reliance" of local municipalities, despite the challenges they face in budgeting. The view from parliament was offered by MK. Osama Saadi and MK. Heba Yazbek, who praised previous cooperation and outlined urgent challenges that demand cooperation. Meanwhile, attorney Omar Khamisi, Director of Al-Mezan Center, identified 300 outlawed organisations supporting the Palestinian cause on a local or international cause. He pointed to one example in which an organisation providing social support to 20,000 orphans was disbanded due to its association with Islamic Movement.

Following the panels and lively Q&A session, the Mossawa Center and its partners presented sub grants to community initiatives, supported by a group of businessmen, businesswomen, and the European Union. This involves both practical and financial support to more than ten community and youth initiatives. The businessmen that supported civil society initiatives are Walid Al-Afifi, "Mazawi Advertising", Ziad Omari, Edgar Khayyat and Salim Lahham. The grants were presented on stage to a wide array of recipients, spanning a youth organization in Fureidis organizing a book festival, a women’s choir in Acre, and a sports initiative for marginalized youth in the Halisa neighbour of Haifa. The Mossawa Center prides itself as an incubator of Arab civil society, and the conference was the latest example of our mission. By establishing an ongoing, first-of-its-kind fund for social initiatives, and establishing and consolidating networks, the Mossawa Center is helping to construct a stronger, unified, and capable Arab civil society. 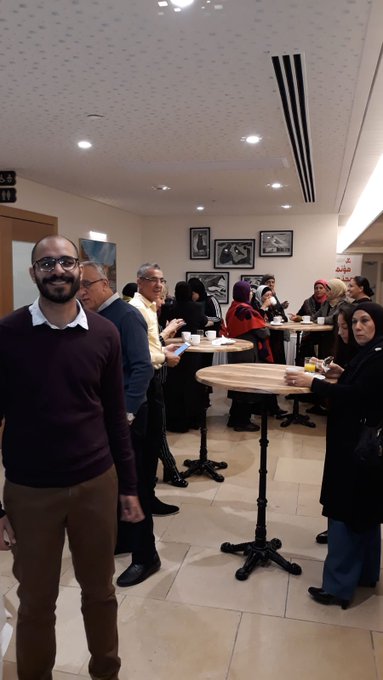 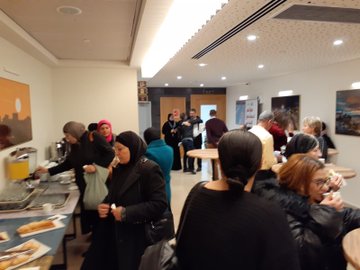 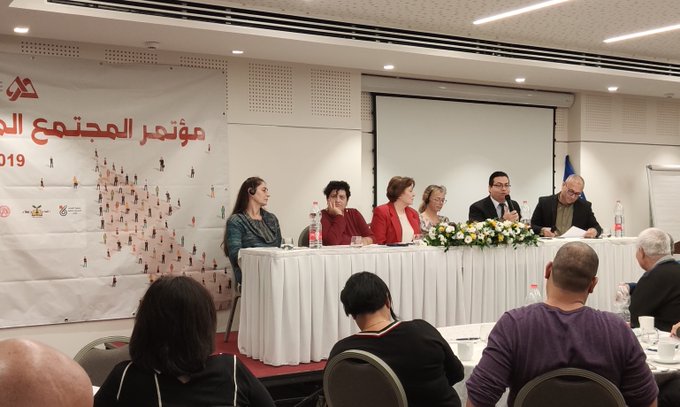 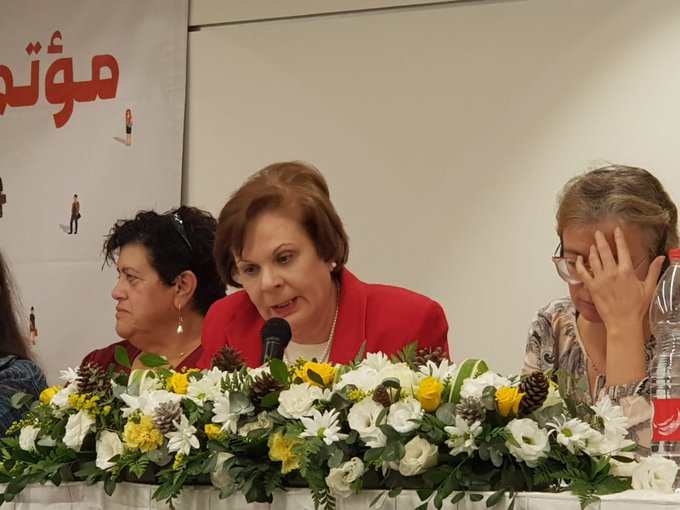 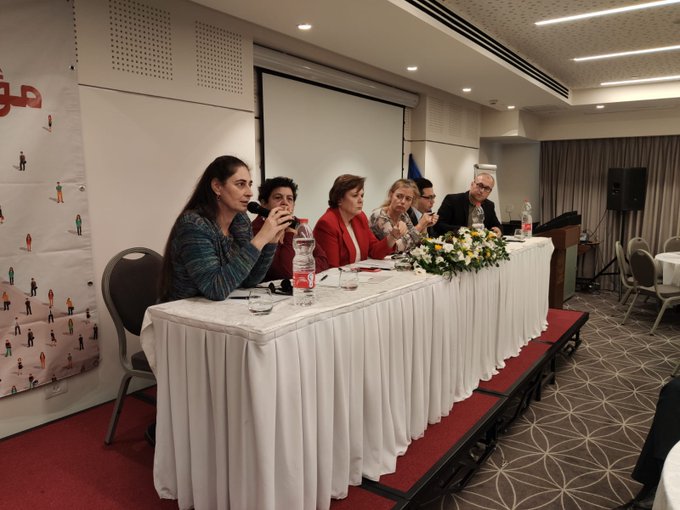 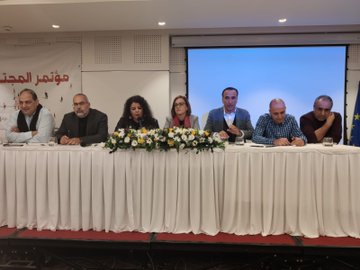 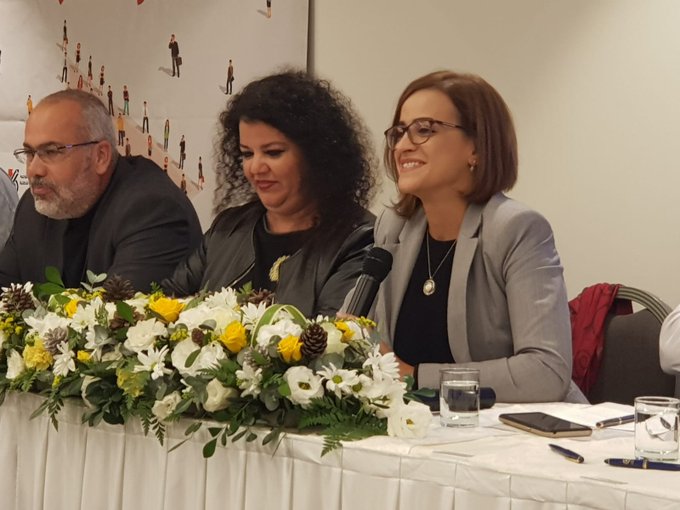 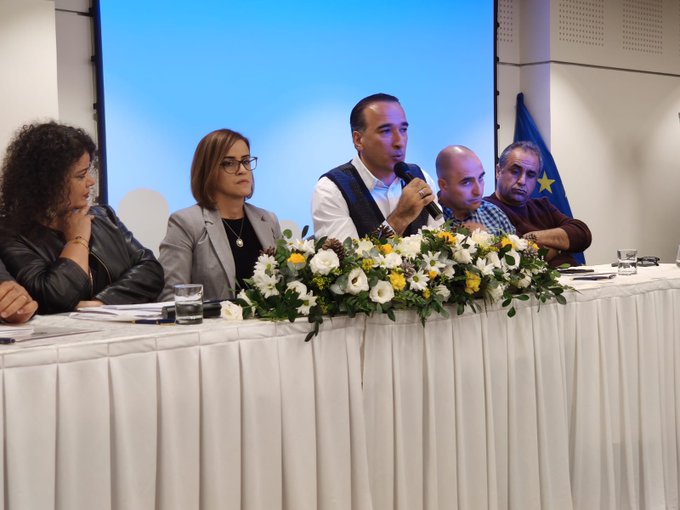 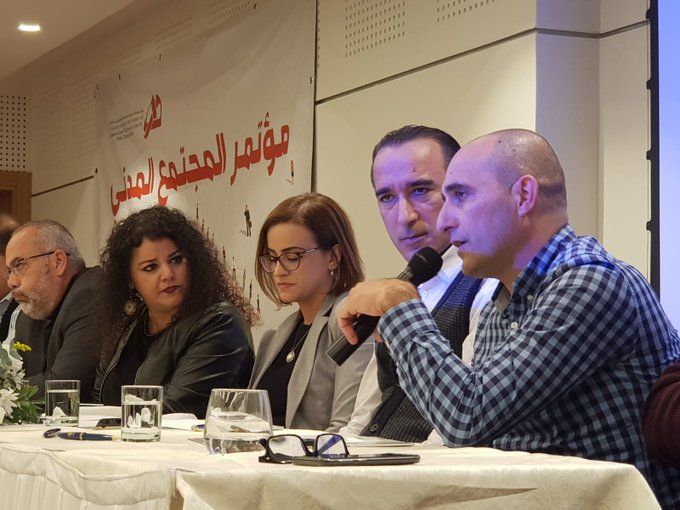 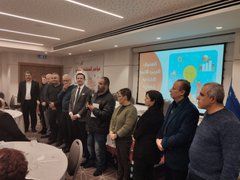 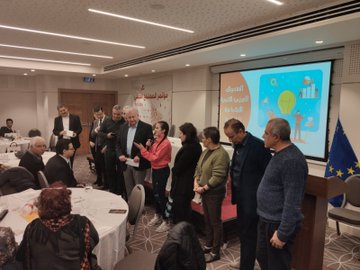