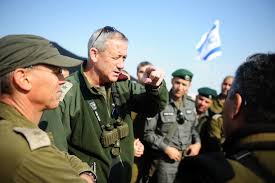 Benny Gantz, the leader of the Blue and White party, has vowed that Palestinian Arab parties "won't be a part of my government" if he is to be elected. In his statement on 11 February, he also added that he will "act to implement President Trump's peace plan.”

While Gantz has claimed to depart from Netanyahu’s agenda, his platform represents little more than a cheap imitation of the prime minister’s far right agenda. He is patently pandering to Likud’s attempts to paint Palestinian Arab citizens of Israel as beyond the pale, with their latest round of fear mongering involving a video that claimed "Gantz does not have a government without Ahmed Tibi." He has proven that he is more willing to cannibalize the Right than build a coalition based on equality, justice, and the rule of law.

Although he claims to be the leader that Israel needs, he has spinelessly abetted an undignified race to the bottom, pushing forward illegal annexations and vilifying 21% of the population. His opposition to the plan to illegally transfer Palestinian Arab citizens of Israel rings hollow when he is fanning the flames of the very conditions that give such ideas breathing space. But he is not the only culprit. The Labor-Gesher-Meretz alliance found time to condemn the UN’s list of companies tied to settlements, but were conspicuously silent about Gantz’s comments.

This not only reveals a lack of scruples, but also a grave strategic error. In response, Joint List leader Ayman Odeh said his alliance would not recommend Gantz to form a government if he does not make a statement against annexation.

Gantz’s right wing one-upmanship undermines Arab-Jewish partnerships within Israel, at a time when they are most needed. Worse still, it escalates the delegitimization of Palestinian Arab citizens of Israel as acceptable political agents. From this basis, such partnerships – which deny the humanity and dignity of one party–  are impossible. The Mossawa Center condemns this manoeuvre in the strongest possible terms and reiterates the pressing need to build a progressive coalition within Israel.