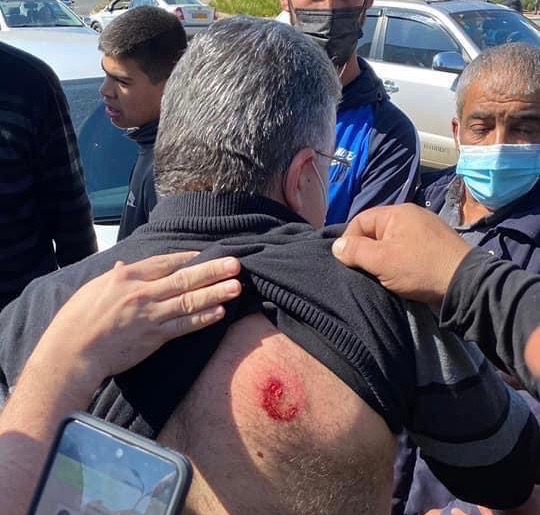 Over 35 Palestinian Arab citizens were injured by Israeli police during peaceful protests, including Umm al-Fahm mayor and Knesset Member, in the Palestinian Arab city of Umm al-Fahm. For the past several weeks, Palestinian Arab citizens of Israel in the city of Umm al-Fahm have been peacefully protesting every Friday against police brutality and neglect. The protests erupted after the former mayor of the city, Suleiman Aghbariah, was shot and seriously wounded by armed assailants. The protests have since grown and are being led by youth movements and activists.
‍
Protesters are calling for an end to the wave of crime and violence that has plagued the Palestinian Arab community in recent years. The crisis has only been exacerbated by government neglect and systemic discrimination, a phenomenon which has escalated greatly during Netanyahu's grip on power. The peaceful protests have been brutally surpressed by the Israeli police who have inured dozens of civilians in recent weeks.
‍
On Feb. 26, ove 35 civilians were injured, including the Umm al-Fahm mayor and Knesset Member Yousef Jabareen of the Joint List, in one of the most violent days since the protests began. The Israeli police has chosen to respond to the Palestinian Arab community's frustration with police brutality and systemic discrimination by using even greater force.
‍
The Mossawa Center transferred materials regarding the police's assault against seven Palestinian Arab citizens on that day. The Executive Director of the Mossawa Center, Suha Salman Mousa, sent a complaint to the Police Investigation Unit at the Ministry of Justice (Mahash) to initiate an investigation into police violence against protesters and detainees. The Mossawa Center continues to collect testimonies about the attacks on demonstrators, and is working with lawyers, the municipality of Umm al-Fahm, and other human rights institutions to bring an end to such unjust police violence.
Subscribe to Mailing List
You can enter your email in the box below to subscribe to our newsletter
Send