The Mossawa Center condemns the raids on Palestinian organizations as an attempt to censor the truth. - مركز مساواة لحقوق المواطنين العرب في اسرائيل

The Mossawa Center condemns the raids on Palestinian organizations as an attempt to censor the truth. 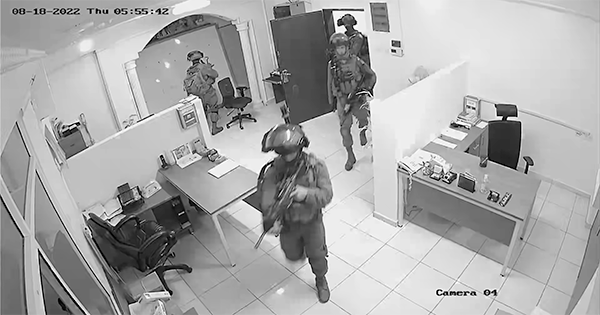 The Mossawa Center strongly condemns and opposes the Israeli military's closure of the Palestinian human rights organizations' offices in the occupied West Bank, namely, Al-Haq, Addameer, Bisan Center for Research and Development, the Union of Agricultural Work Committees, Defense for Children International, the Union of Palestinian Women’s Committees, and the Health Work Committee.

Israeli soldiers stormed the institutions’ offices, confiscated their property, sealed their doors with iron panels, and left behind a military order declaring the organizations unlawful. Orders and threats were imposed preventing anyone from entering the offices as well.

This is a clear attack on Palestinian civil society in an attempt to silence the voices of the Palestinians, a clear violation of our right to freedom of speech and expression. This is what the Israeli military does; it vaguely defines the concepts of terrorism as it pleases in an attempt to suppress any and all types of opposition to the occupation and the Israeli government’s systematic discrimination against Palestinians. The Israeli government and its military are only concerned with censoring and silencing every voice that documents and exposes the crimes of the occupation in the occupied West Bank and Gaza.

The Mossawa Center stands in solidarity with the institutions and fellow human rights defenders in the occupied West Bank and calls on international institutions to provide all support to these institutions to continue their work in the region and abroad until the end of the occupation.