On the 46th anniversary of Land Day, the Mossawa Center stresses the central issues that the Palestinian Arab community struggles with in terms of land - مركز مساواة لحقوق المواطنين العرب في اسرائيل

On the 46th anniversary of Land Day, the Mossawa Center stresses the central issues that the Palestinian Arab community struggles with in terms of land 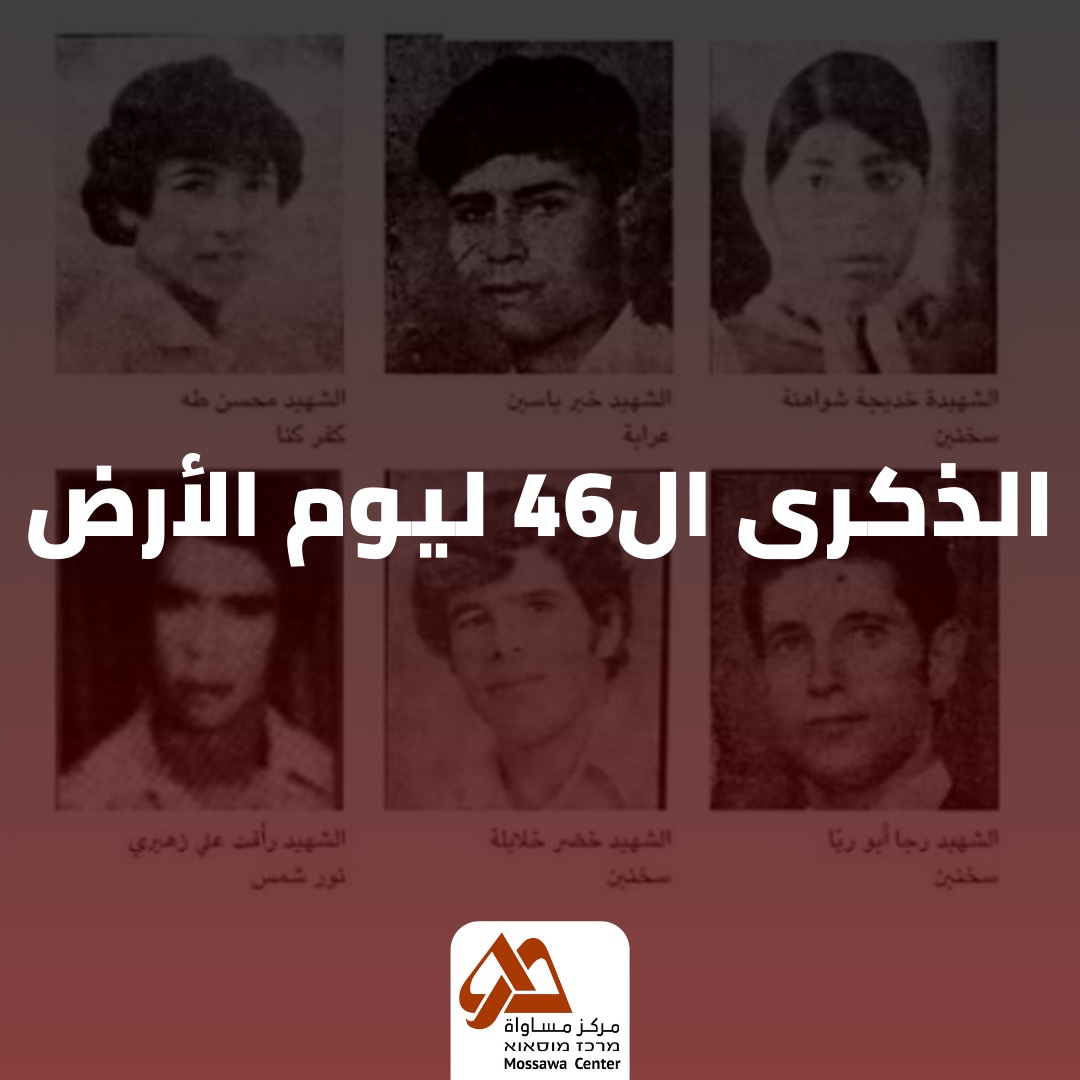 The problem of construction and housing is most acute in the unrecognized villages in the Negev, where around 100,000 Palestinian Arab citizens inhabit 30 unrecognized villages, and in mixed cities that suffer from difficult living conditions and lack basic services. In these locations, the government demolishes homes on a daily basis and issues hundreds of demolition orders rather than providing adequate solutions that meet the needs of residents.

Since 1948, the Israeli government has confiscated most of the Palestinian people's land using a various laws. In 1975, it declared 21,000 acres as a closed military area with the aim of confiscating it. Palestinian Arab masses rose to confront this decision, led by the Committee for the Defense of Lands. During the confrontations, which were triggered by the Israeli government’s violent suppression of peaceful protests, six Palestinian Arab citizens were killed (including a 15-year-old), hundreds were injured, and hundreds more arrested by the authorities. The Palestinian Arab masses thwarted the confiscation process, and the Ministry of Defense canceled the military closure order in the nineties.

Recognition of the Villages of the "Arba'in"

Restriction on the Right to Housing

The Israeli government continues to deepen discrimination against Palestinian Arab housing in various areas that are developed for Jews only. During the past year, the government announced its intention to establish 8 settlements for Jews in the Negev region. Previous decisions to recognize unrecognized villages were not implemented. The Negev Development Authority has demolished about 3,000 buildings in the Negev over the past year.

Recognition of historical ownership over the land of the Palestinian Arabs of the Negev is an ongoing struggle for the residents of the unrecognized villages. The demand is focused on recognizing the ownership of the Palestinian Arabs of the Negev on their lands, according to the documents they possess. The percentage of the lands for which they are demanding recognition do not exceed 3% of the total land in the Negev.of the land of the Negev. Meanwhile, the Israeli government allocates lands for Jewish families to set up "family farms" and several tourism projects.

Afforestation and Plowing of the Land

The government is planting trees disputed lands to prevent their use by the Palestinian Arabs of the Negev and plowing the cultivated lands they already have. This is despite the fact that the government has given dozens of Jewish towns and Jewish families millions of dunams for cultivation and gives them financial aid to support agricultural production.

Recognition of the Right to Reside in Unrecognized Villages

We demand the recognition of the right of the Palestinian Arabs of the Negev to live in their unrecognized villages and and end to the forced transfers that took place in some of the towns such as Umm al-Hiran a number of times.

Despite the many forms of housing that the Jewish population in the Negev have obtained (kibbutzim, moshavim, villages, towns and family farms), the authorities refuse the right of the Negev Palestinian Arabs to choose the form of the localities they want to live in. It imposes on them a single model of traditional villages and cities without giving them the right to establish agricultural and livestock areas and industrial areas that serve their urban development.

The historical and mixed cities turned into one of the preferred forms of housing for the residents of the Galilee, the Triangle area, and the Negev to migrate to following the housing and development crises in the existing Palestinian Arab towns. The municipalities and government ministries did not build new Palestinian Arab neighborhoods in these cities, despite the increasing immigration to them in recent years. On the contrary, some municipalities such as Lydda and Acre incite against their own Palestinian Arab resident and deny them housing and services.