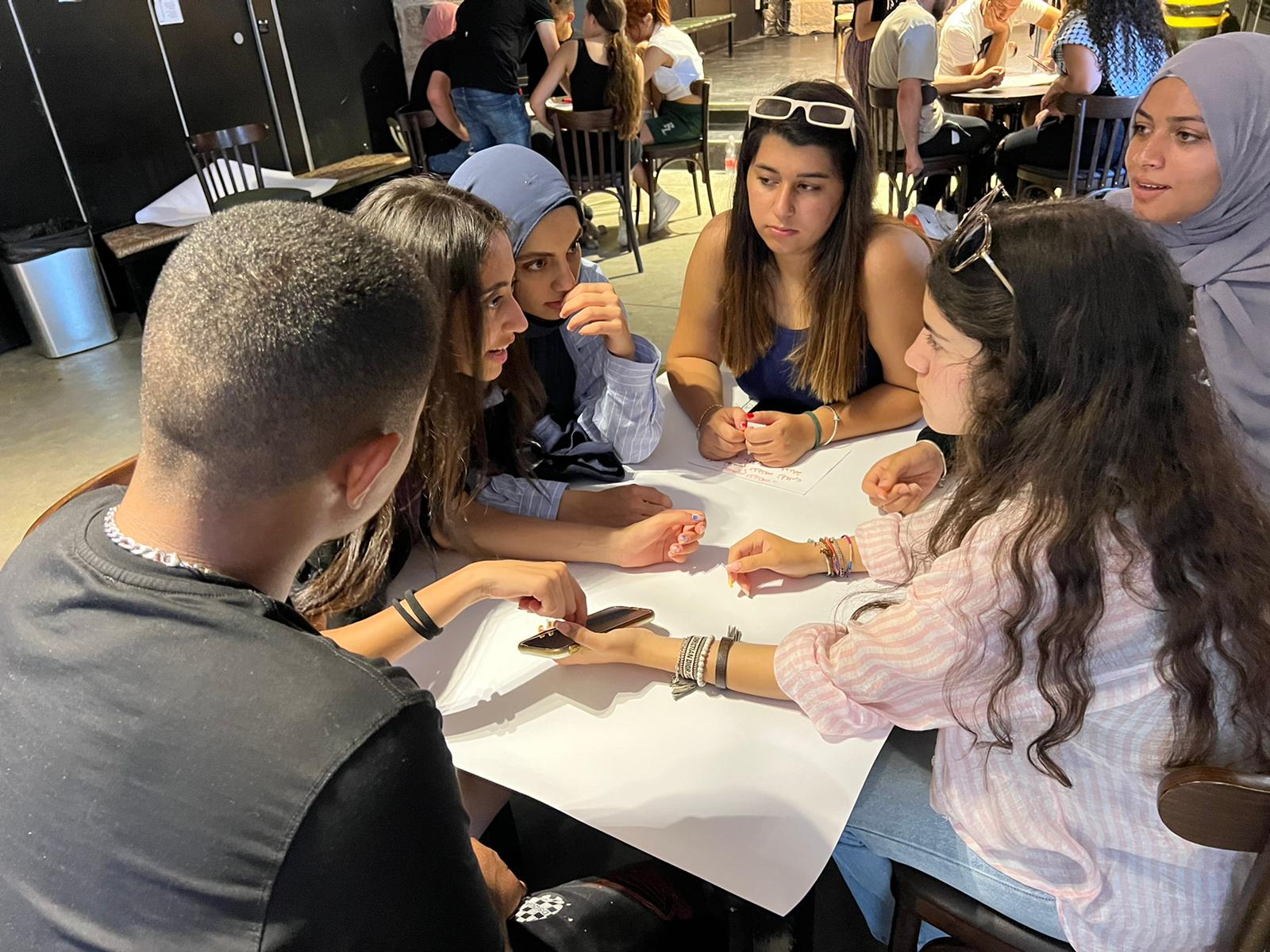 The Mossawa Center is pleased to report that the annual Know Your Rights youth workshop series held by the Mossawa Center finished on July 29 with positive feedback and appraisal. Held throughout the last week of July, more than 40 youth between the ages of 14-18 signed up for the Mossawa Center’s annual youth workshop series held in its building in the Carmel district of Haifa.
The Palestinian-Arab youth attending came from different backgrounds from many different localities, including villages such as Jisr al-Zarqa, Kafr Qara, Qalansuwa, Kaukab Abu al-Hija, and more. As younger generations of Palestinian Arabs slowly lose optimism about their status improving in the country, the Mossawa Center has had the unique and important role of working with the younger generations in the region to spread positivity and encourage them to be active members of their communities.
The first day of the workshops began with an opening speech and a presentation by staff members of the Mossawa Center, explaining the work of the organization and its goals. After the opening speech followed a series of ice-breaker activities aimed at teaching the youth leadership skills and discussions around social and cultural identity and concepts of social change and responsibility. After that, an international-styled musical performance was held by the Carmel Music Association and locally-famous singer Manar Nour.
On the second day, the youth and the accompanying Mossawa Center staff and counselors set off for Jerusalem. In Jerusalem, the youth group was given a guided tour of the Knesset, giving them the chance to explore the various legislation halls and chambers and learn about the lawmaking process in the country.
After the Knesset tour, the bus set off for the old quarters of the city, eventually ending at the Burj al-Luqluq Community Centre. At the Luqluq Centre, media and communication coordinator talked with the youth about the challenges faced by the residents of Jerusalem and the importance of networking and communicating with other Palestinian Arabs. More sightseeing followed after leaving the Luqluq Center, eventually returning to Haifa in the evening for some reflection activities before sleep.
On the third day, everyone set off for the historical district of Jaffa. The Canadian Embassy to Israel graciously agreed to give a tour for all the youth of their embassy there and explained the roles embassies have, their civil responsibility, and their aims in enhancing diversity and creativity, and facilitating cooperation.
After the presentation by the Canadian staff, the youth were encouraged to ask questions they had about international advocacy. Afterward, the youth went on a guided tour of the historical streets of Jaffa, where they saw the old buildings and historical neighborhoods of the city. The walk continued, and the youth arrived at the Arab-Hebrew Jaffa Theatre near the Mediterranean coast—one of the few unique theaters holding plays in both Arabic and Hebrew.
There, the youth was split into two groups, each participating in a multitude of different workshops and activities. The first group had improvisation and acting exercises allowing them to express themselves freely. In the second group, the youth presented local issues they face in their communities on stage for the rest of the group. The workshops served as a link between the participants and social advocacy about the issues they face in their daily lives, as well as their cultural identity and personal attributes. After the theater, the participants returned to Haifa for a last social gathering before the day ended.
On Friday, the last day of the Know Your Rights workshop series, two segments of workshops and activities took place. The first segment included a workshop held by the staff from the center, which started with a group discussion about local social issues and individual participants’ initiatives for solving and ameliorating the situation. The second segment was held by Mahmoud Ali al-Saleh from the Speak Up Group. The workshop aimed to help the youth improve their public speaking skills and taught them how to write better and more articulately. The day, and the workshop series overall, concluded with a certification ceremony, in which each participant received their personal diploma and everyone had the opportunity to bid each other farewell.
The workshops proved to be very successful among the youth, with everyone sharing the tremendous knowledge the workshops provided them, as well as the unique experience of meeting kids from such diverse backgrounds. Camps and workshops like this, designed specifically for youth, are extremely critical in giving hope to future generations living in conflict-stricken areas and showing them their own history and culture. By the end of the workshop series, the youth felt empowered. Having the necessary tools for advocacy, the youth can begin their own civil society initiatives, both nationally and internationally.
Subscribe to Mailing List
You can enter your email in the box below to subscribe to our newsletter
Send