“For us, everyone is a first class citizens”: Mossawa Center launched campaign against discrimination in medicine - مركز مساواة لحقوق المواطنين العرب في اسرائيل

“For us, everyone is a first class citizens”: Mossawa Center launched campaign against discrimination in medicine 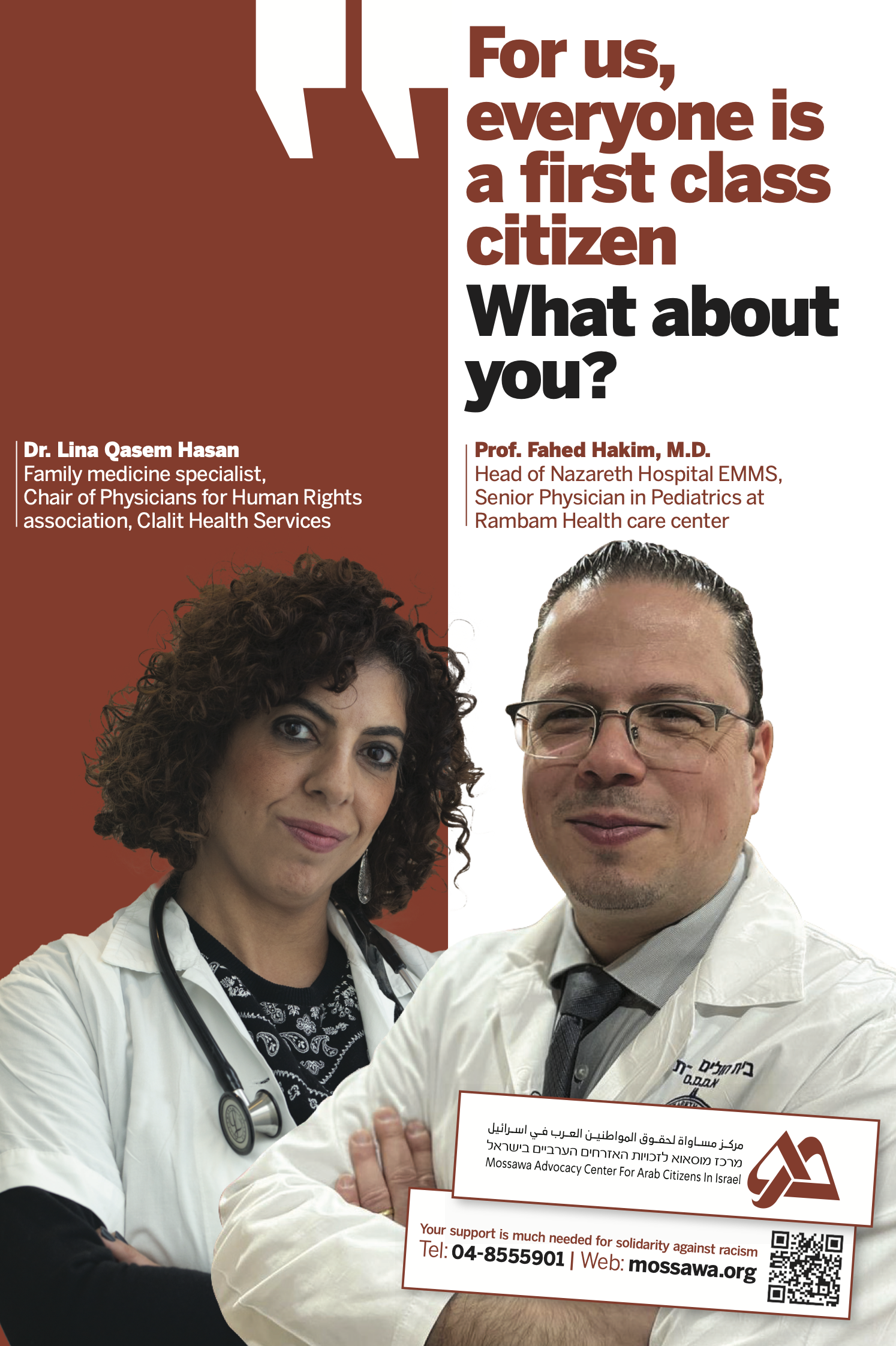 On the day of the swearing in of the new government, the Mossawa Center, together with Palestinian Arab doctors, launched an extensive online and print media campaign under the slogan "For us, everyone is a first class citizen." The campaign was launched in response to comments made by the new Minister of National Missions and Religious Zionism Knesset Member, Orit Strook, who said that doctors should not be obliged to provide medical treatment contrary to their worldviews. Strook and her colleagues did not hide their intention to change the law to prevent discrimination in services.

Palestinian Arab doctors are at the forefront of medical care in Israel. They provide dedicated and professional medical care to all citizens of the country and are not ready to be treated as second class.

A number of doctors are taking part in the campaign, among them Prof. Fahad Hakim - Director of the EMMS Nazareth Hospital (known as the English Hospital) and an expert in pediatrics, children's lungs, and sleep problems at Rambam Hospital. Dr. Hakim, who in recent years has led the wide development of the hospital, is also engaged in medical research and led the establishment of a coronavirus clinic at the hospital. He is currently working on the establishment of new departments in the hospital, including a state-of-the-art triage that will provide treatment to all residents in the Nazareth area and the Galilee.

Last week, at the initiative of the Mossawa Center, the hospital hosted a large group of Russian journalists and bloggers with the aim of attracting to the hospital Russian-speaking patients who live in the Galilee region. "We are bound by the doctor's oath, we give of ourselves to save the lives of the patients and I really did not like that they try to treat us, the Arab society, as second class. The statements of some politicians about the possibility of discrimination in medical treatment are inappropriate and the medical teams in all hospitals did well who responded with spontaneous campaigns," said Dr. Hakim.

Dr. Lina Kasem Hassan, an expert in family medicine in general health services and Chairperson of the Physicians for Human Rights Association, is also taking part in the campaign. Dr. Kasem, who works in Kiryat Bialik, said, "as a woman and a doctor, I am first of all obligated to my patients and it doesn't matter to me what their background is or what their origin is. The whole attempt to harass Arab doctors in recent months is aimed at weakening the group that manages to save Jewish and Arab lives every day. The response of the medical teams is important, but it should also lead to a movement that will work towards closing the gaps and substantial equality."

More doctors offered to join the campaign and expressed confidence that the majority of the public who receive medical treatment from the Palestinian Arab medical teams will not allow discrimination in medical services and racism to affect the positive atmosphere in the health system.